"Mercenaries do less damage and are much less mobile than Swordsmen. They make up for this however, by being the most heavily armored character in the game. Their primary focus is engaging enemies one-on-one and taking the kind of blows other characters can’t, allowing their friends the opportunity to damage and destroy larger enemies. Mercenaries may use axes or hammers."

In PvP Mercenaries are powerful close-ranged attackers whose skills have large AoE and wide arcs compared to the other melee classes. While they generally have slower attacks and skills, they have naturally high Super Armor and gain even more during many of their skills, allowing them to overpower other class' skills in a head-on clash. 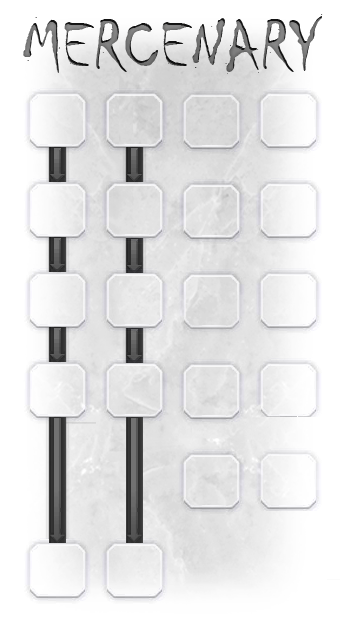 Honing and training their strength, the Barbarian improves his damage output. A Barbarian perfects it's skills for one on one combat while still retaining his AoE within them.

Sharpening and exercising their force, the Destroyer improves his critical output breaking his opponent and renders it helpless.

At level 44, go to Gerrant the Poochum in Liverwort Marina and start your class change quest. You will then talk to Pedro in Lotus Marsh and start some dungeon runs. These runs are located at (in chronological order), East Armory, West Armory, and Ruined Village.

Once reaching level 45, go to Gerrant's Sword in Liverwort Marina and start the Final Test. Here, you will be able to test both 3rd job skills on a shadow Mercenary. Once done, go back to Pedro and select the desired class.