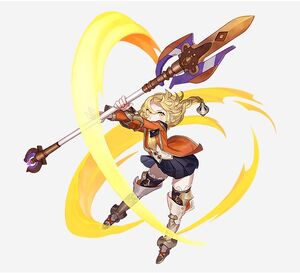 Freely wielding a spear bigger than her body, a Piercer elegantly becomes one with her weapon as she charges into battle. No enemies will escape from her movements.

The core of Piercer's strength is in her Erratic Power skill, which increases her movement and action speed, and her final attack stat. However, as this skill is active, Lencea stacks one Fatigue every two second, and at ten stacks of Fatigue, Lencea's movement and action speed becomes slower, health depletes, and is unable to use skills that are connected to Fatigue.

It is because of this system of Fatigue that she is challenging to master and is recommended for Advanced players.