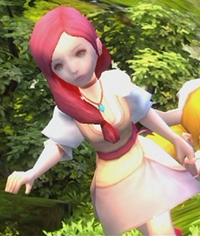 Rose and Lily running away from Goblins

A descendant of the Ancients. The power of the Ancients that lay dormant within her are sought after by evil forces. Adoptive grand-daughter of Elder Harold, adoptive sister of Lily, daughter of Clara and Leon.

The Siege of Carderock[edit | edit source]

10 years ago, a bright star above Carderock Pass signaled the arrival of Rose. She and her parents were being hunted down by Elena and her army and requested aid from the people of Carderock Pass. Leon attempted to awaken the guardian at Sanctuary Nexus but he lost his life at Forest Sanctuary.

Clara brought Rose west towards Ironwood Village where she left Rose in the care of Elder Harold. She then led the monsters away from Ironwood Village and threw herself off a cliff to fool the monsters into thinking that she and Rose had died. The monsters then retreated and eventually the siege ends. Clara's remains was later found and given a proper burial at Ironwood Village. However, Elena hasn't given up on searching for Rose.

Rose was kidnapped by followers of the Elena. The player, as a Warrior or Archer, work with Elder Harold, Captain Steve, and Militiaman Timothy to rescue Rose, to no avail. After trading hands several times, she was last in the hands of the Harpies.

The Vision Staff tells the prophecy of Rose, who is a descendant of the Ancients and evil forces are after the power that lay dormant within her. Thus the player is charged to rescue her. 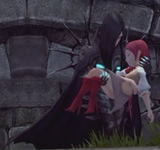 The player tracks him down to Forest Sanctuary, but was knocked unconscious. Velskud then brings Rose to Temple of the Sleepers. The player and Argenta then tracks Velskud down at Temple of the Sleepers. He duels Argenta and soundly defeats her. Velskud then draws out the power of the Ancients from Rose and absorbs it into himself. He then fled to Black Mountain Foothills with Rose.

Gerrant and Rose in the Saint's Haven castle basement

Velskud left Rose at his fortress at Black Mountain Foothills and created a nest to thwart all effort to rescue her. Argenta, Gerrant, and the player worked with the Saint's Haven Royal Army to assault Velskud's fortress and rescue Rose.
Gerrant then created his nest in the Saint's Haven castle basement to protect Rose.

Lady Kaylinn created some dream powder for the player to peer into her dream in order to awaken her. Rose's dream depicts her life story. Her father Leon brought her to Carderock Pass to seek shelter from Elena's army. Rose is then seen with Lily honoring the grave of Rose's mother Clara. Later, Rose is seen in the hands of Velskud where he used the machine at Temple of the Sleepers to draw out the power of the Ancients within her and absorbs it.

Rose explains that she refuses to wake up because she sees everyone she loves around her had to suffer and die and she cannot live with that.

After some time, Gerrant was killed by the Leviathan and his nest was destroyed. Bishop Ignacio kidnapped her and fled.

Terram rescues Rose from the Dragon Cultists after the player defeats Kalahan.

At the end she becomes Rosalinde and declares herself Velskud's successor. She nearly kills him, but Terram manages to save Velskud, but requests the player to go to the Tree of Life in Arendel to save him.