Back to page
Add topic

That'd be awesome, I had something to ask you anyways. I tried a transparent background last night but it wasn't working at all for IE so I reverted it, I'll probably try again with it tonight except avoid the transparency, I do need a background though! --Bumbletalk 23:09, 20 July 2011 (UTC)

Yeah but, for some reason, there are level 1 skills that have a purchase price, even though you automatically obtain them...! ;_; 〜Celadontalk

So, since I think you played on the asn versions, maybe you happened to see equipments like [ File:Greatsword 049 View 1.png ] with a certain [ File:Greatsword 049.png ] icon? Are they cash costumes or just normal equipments? Seems like there's 3 colors of those for all 3 types of warrior weapons (haven't check other classes yet). Thanks :D → Nedigo talk ― 14:22, 6 August 2011 (UTC)

You can check for weapons on classes you played or something with the model browser. They are the ones that are like, for example, cl_wand_s01_a. Compared to the "normal" ones that are like a01, b01, c01, etc. this one skipped to s01? o.o
Also, could you look at the apocalypse images too please? Is it the right material? Or does it have some reflections and stuff on it..?→ Nedigo talk ― 19:47, 6 August 2011 (UTC)

Lol, but actually the model browser is really just for browsering, since like, it will only look up for .msh and .dds that have the same name as the .skn (or something) and I noticed a _mask.dds after the .dds texture map for apocalypse and ancient totem... I though it could be a map for reflectivity on the apocalypse... but then it wouldn't make sense on the ancient totem ;-; → Nedigo talk ― 14:49, 7 August 2011 (UTC)

First off, you're so intense uploading all the Academic and Engineer stuff!! Did you translate the names, or are they already in the NA client? Also, where did you get the first dnskilltable file, and do you know how to open the .ext files? I want to know what's in them. →Solidustalk 17:14, 7 August 2011 (UTC)

Are you planning on making a template for dungeon entrances? If not, maybe I could :3 with the background image, and the map thingy, with all links to the dungeons, sorta.

Oh, I just noticed the section for that on the zone pages. Do you think the entrance dungeons need their own page too? Just for a pref overview of those dungeon, with an image of the background (I think visual is important), some level reqs, and perhaps some other things...

Complaining about the new skin!![]

New skin is hot, yo. Some beef I have with it though:

Lol I was just complaining about the color, soap wrote the rest O_o and er, I preferred dark than cold I guess D: and why are links green in template or same color as text? Item Template looks weird now :o → Nedigo talk ― 23:31, 17 August 2011 (UTC)

Heh, the reason why it wasn't working was probably because div.thumb was already there! lol So, I fixed that and also added border collapse to gallery tables and fixed the mw-js-message. → Nedigo talk ― 23:19, 18 August 2011 (UTC) 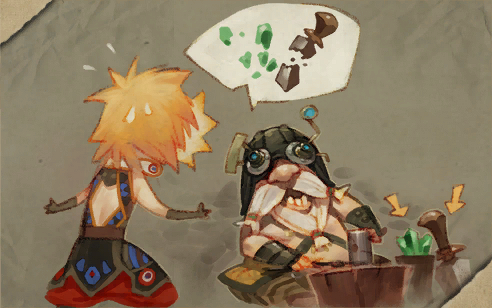 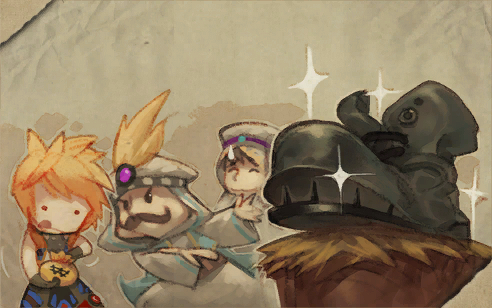 Oh. From what I found the "logical" place it would be is under "album" under the "friendship" window. In the files they call it "repute" and the database would "logically" say you unlock those with "Bromide Quests" ._.' Try understanding something in that lol → Nedigo talk ― 14:01, 21 August 2011 (UTC)

I was trying to build up map images for zones outside towns but then I ran into a problem: map images in the client has waaay to much transparency without the background layer. So I was wondering how you got those images for towns? They don't look like they were cropped from a screenie, and they still have some transparency... Did you make them or taken from an other site? Maybe there's a way in photoshop to add alpha, but I don't know it enough to find that ._. → Nedigo talk ― 22:00, 22 August 2011 (UTC)
Note: Wow, I'm relying on you so much ._.

Would like to ask if you could do something about the selling price for items that can't be sold.

Is it possible to leave out that entry? [referring to Template: Equipment > entry "sell="]

So does like Greatswords_(1-50) page replace Greatswords_List page/categories? Also, shouldn't like Greatswords_(1-50) be in Category:Equipments instead of Category:Greatswords? It seems kinda weird... And I think it should be better naming pages as (Lv.1-50), seems Greatsword_(1-50) could mean the 1st greatsword to the 50th... but that's maybe just me, and should there be a page "Greatsword" linking to those? And what about the weapons portal? :o to which will they link?. Now I feel bad because I have the impression I give as impression that I keep giving you hard time and stuff ._. but that's wrong... it's just that I prefer discussing with the person before messing with his work right after, meaning I don't mind going and rename pages/replace categories :) → Nedigo talk ― 02:29, 16 September 2011 (UTC)

Hiya and a Quick Question[]